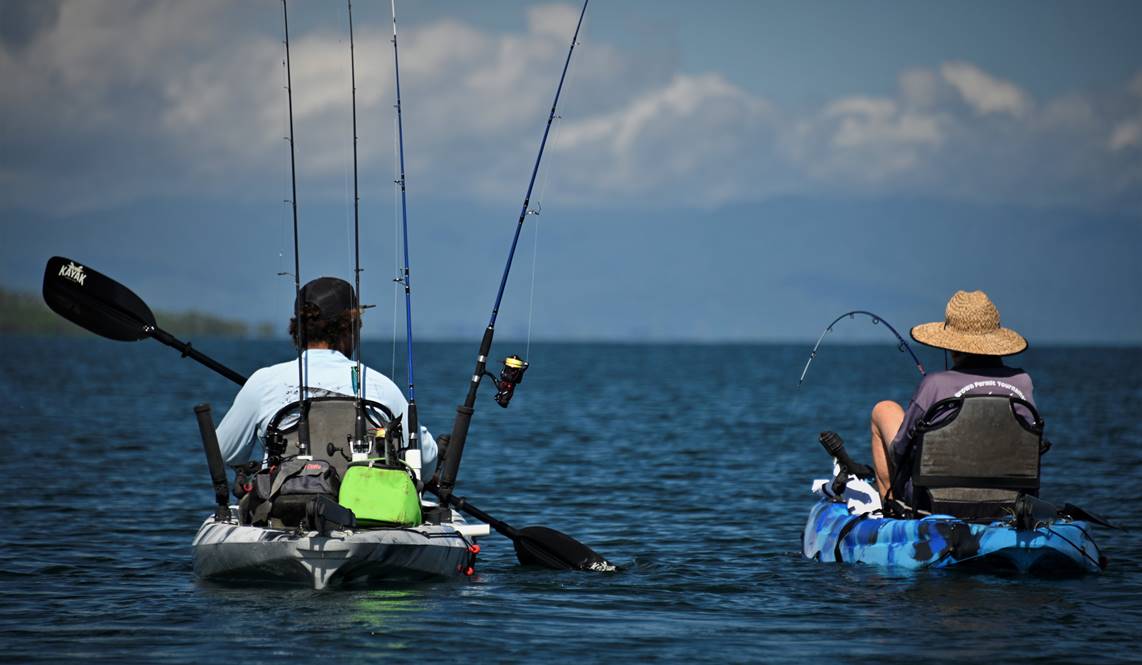 From the moment you arrive at the Gulf of Dulce Bay in Puerto Jimenez to begin your Kayak fishing adventure, you are immediately taken by the sights, sounds, and challenge of the undertaking. As you load your equipment into the narrow craft, there is heightened anticipation as to what you are “most likely” going to experience. I say most likely because this particular body of water is known for being an extension of the most bio-diverse habitat on the planet. An aquatic environment where to date I’ve already hooked, fought, and landed a total of 55 different species of gamefish to date. Some, much larger than yours truly and the kayak itself.

At 5:00 AM, It’s still dark – technically speaking but there is the early morning glow of the sun that is slowly making its way up to the top of the mountains immediately across the gulf in neighboring Panama 10 to 15 miles in the distance. You immediately focus on the levels of elevation that are created by the water level, the landscape in the distance, and the blanket of clouds and horizon being lit up by the anticipated sunrise. The water of the gulf itself is dead calm and as you organize your gear and climb into the kayak, there is a sense that you are about to be somewhat vulnerable to the reality that something really big could tow you a considerable distance – across the gulf into water that is really-really deep.

Your tools and equipment = Three rods (a bait rod, a jig/popper rod, and a live bait rod) all conveniently placed in the rod holders around the perimeter of the craft, plenty of tackle (leader, hooks, jigs, lures, and plyers), sunscreen, water and something to eat because you will be tested energy-wise. When fishing in a Kayak, it’s very different because you intimately feel as though you are actually in the water because – your eyes are a mere 3+ feet above the surface. This can be a challenge when casting and takes some practice even for an accomplished angler. Today I get the chance to fish from a new vessel, a high-quality Kayak with peddles and flippers that allow for a completely different mode of transportation. Using your feet to power the craft allows for the angler to fight any fish completely unencumbered by the burden of paddling with your hands.  This opportunity came in handy a few hours later when I hooked the fish of a lifetime.

As you paddle out to catch some live bait, your eyes are keen to pick up on the water’s surface looking for that telltale indication of where life with fins (sardines, Blue runners or Goggle-eyes) are “balled up” at the surface.  While live bait of any kind tends to be the most effective fishing tactic, virtually every method of fishing will produce depending upon your willingness to repetitively cast or vertically-jig artificial baits.

This is where your guide is essential, not just to provide an assist with every element of the outing but to increase your odds of success in catching something special.  In our case, Captain Tosh is considered the local expert as he has logged endless hours in the bay hunting, hooking, and catching some exceptional game fish.  The most prized being the Pacific Roosterfish.  I’ve even witnessed Tosh fighting and landing a 50-pound class Roosterfish on a hand line – a battle that took over an hour.  He has also managed to chalk up a 50-pound Yellowfin Tuna and a Sailfish – all by hand as well.

Captain Tosh is an anomaly as a guide. First of all, he’s only 16 but don’t let that influence you because he’s mature beyond his years.  I’m not just referring to his fishing expertise but it’s his passion for assuring an experience of a lifetime for his clients that conveys an enthusiasm that’s contagious. After retaining professional fishing guides all over the world, I’m qualified to say he will become one of the best in his field and for this angler – a fishing partner for life.

Today for my new neighbor and fishing partner Dave Horn, we are on a mission. The mission to catch the uncatchable 40+ pound class Roosterfish (affectionally referred to as “RoosterZilla”) and to ultimately land the fish on the beach for some “close encounters of the third kind” photos of the fish in the water. BTW… For the record, the degree of difficulty of this task is 3.0 on the competitive diving scale (aka – really hard). The good news for me is that today I get the chance to use the peddle Kayak with flippers to give me a shot at this lofty goal. To quote the great philosopher Carl in Caddy shack (Bill Murry)… “I’ve got that goin for me!”

After about an hour, Dave and I are set up in the pay zone with both live bait and the ability to work our topwater poppers. Dave hooks up first and in the blink of an eye he’s being towed out to the middle of the Gulf at about 6 knots. Obviously hooked to something significant, there is nothing he can do at this point other than to manage the position of the kayak relative to the angle of the fish and not let the fish get him completely sideways. If this were to happen with 30+ pound fish, it’s possible that you’ll be going for a swim while still being connected to the fish.  NOT GOOD!

Dave does a terrific job – patiently fighting the fish for about 30 minutes until Tosh manages to align his kayak parallel with his to land the fish.  It turns out to be a high-teen pound class Jack Crevalle that is a trophy catch anywhere, especially in a Kayak.  These fish, pound-for-pound are exceptionally strong and have extraordinary endurance that makes them a true test to catch on light tackle.

After getting some pictures and paddling back to our pay zone, I hook up immediately with something that has serious mass. The thing that I love the most about fishing in the Osa Gulf is the possibility of catching a fish of a lifetime – almost every time you venture out. In this case, the fish was telegraphing to me by the way it was fighting that it was likely a roosterfish that was in the trophy class. The first “dash-board-indicator” was the speed of the initial run once the fish realizes it’s hooked (stripping out 100 yards on line non-stop), followed by the massive/violent head shakes and the power to literally tow the kayak non-stop at high speed for close to an hour. When you experience this for the first time, it’s exhilarating because of the immediate respect you develop with the “ultimate athlete with fins” that inhabits the Gulf. The athletic prowess of these fish is also matched by their stunning looks and display of their dorsal fin that can extend over two feet above their backs.

Fortunately for us, the fish did a few convenient laps around the bay (instead of visiting Panama) and I was able to “persuade it” to swim towards the beach at the point using the peddles in the Kayak to provide locomotion. I’ve been trying for three years to hook, fight and land a trophy roosterfish on the beach so that I could get some close up and intimate photos. Now I had a shot, all because I wasn’t handicapped to both fight the fish and paddle the Kayak with my hands.

As we arrived at the beach and secured the Kayaks, Tosh and I were both ecstatic because we knew the difficulty of this challenge.  Unfortunately, somewhere along the line the fish didn’t get the message and was determined not to cooperate.  Every time I managed to get Mr. RoosterZilla close to the shore in shallow water for Tosh to grab, it managed to come back to life and strip off another 100+ Ft of line. This happened three times and finally, on attempt number 4, the fish finally came within Tosh’s reach to secure by the massive tail.

Whereas I’ve landed several trophy Roosterfish in the Gulf from a boat (including three 60 pound class fish and one 70 pound class), this was the first I’ve ever landed fishing from the Kayak and the first ever that I’ve been able to get into the water with. The best part of this experience was the privilege of fighting, and landing this trophy fish, and releasing it to someday provide another angler the challenge and exhilaration of the experience. These pictures will serve as a life-long reminder of the most memorable day I’ve ever fished in the Kayak.

After reflecting on our Roosterzilla experience, Tosh and I paddled back out and in no time, I hooked a 30-pound class Jack Crevalle on my topwater popper and whereas this fish was somewhat smaller, it managed to tow me out into the gulf for a deep water battle. Just as tosh was about to land the fish, I got a little too aggressive and impatient with the pressure fighting the fish and as it came close to Tosh’s Kayak, I shattered my St. Croix rod into three pieces. This was clearly operator error on my part and if I fought this fish the same way that we did the Roosterfish, I wouldn’t be sending my rod back to Wisconsin for a replacement.

I’m writing about this fishing experience after returning back to my Hometown of Bozeman Montana where it is currently -15 degrees f outside. I can’t wait to get back to our home just outside of Puerto Jimenez and to get back onto the water with both Captain Tosh and his dad Cory (with the street reputation of being the second-best Captain and fishing guide in Costa Rica).