Our goal here in Costa Rica is to fish for what you want, how you want. Whether it's: Inshore or Offshore, trolling, casting, bottomfishing or jigging, conventional or fly fishing, We will use our experience in all areas to put you on action throughout the day. Our goal is to make your trip productive and fun. We will do what it takes to keep you on fish. If the offshore action is slow we can move inshore to bend a rod. If it’s happening offshore we’ll head out for the afternoon bite. You will hear stories of captains detouring people from fishing inshore, or not willing to change methods or locations when the fishing is slow. There are many ways of staying on the fish and changing methods and locations is never a problem. With over a dozen years fishing these waters, a lifetime of experience, and quality equipment, we are more than confident we can give you the trip of a lifetime. 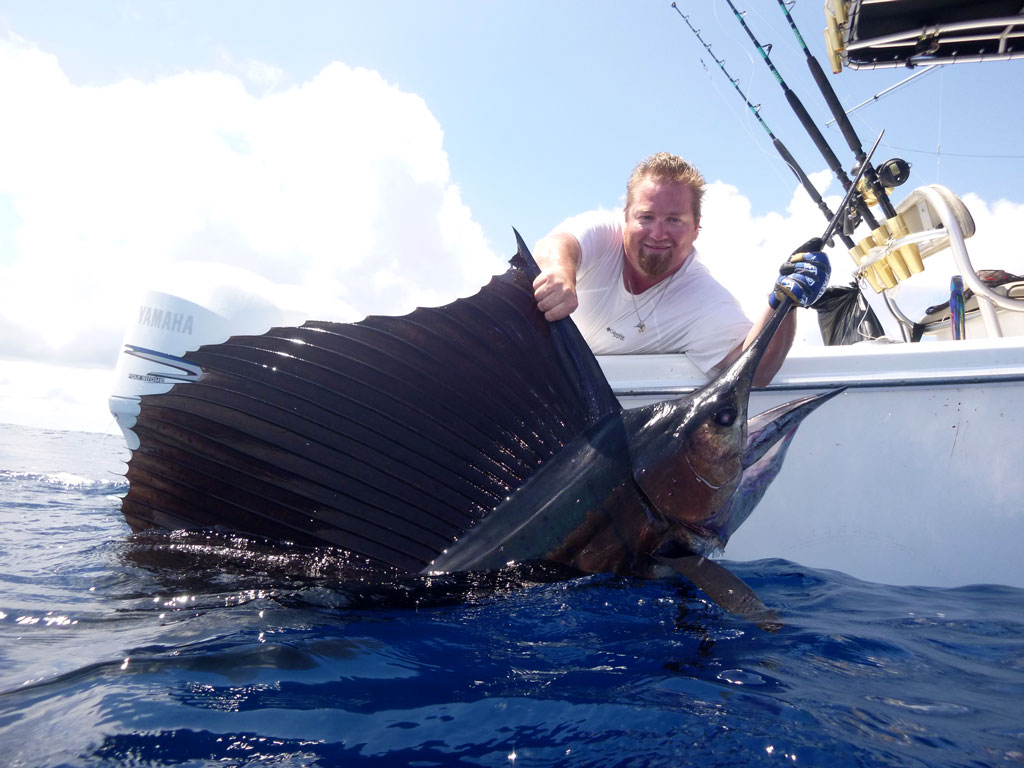 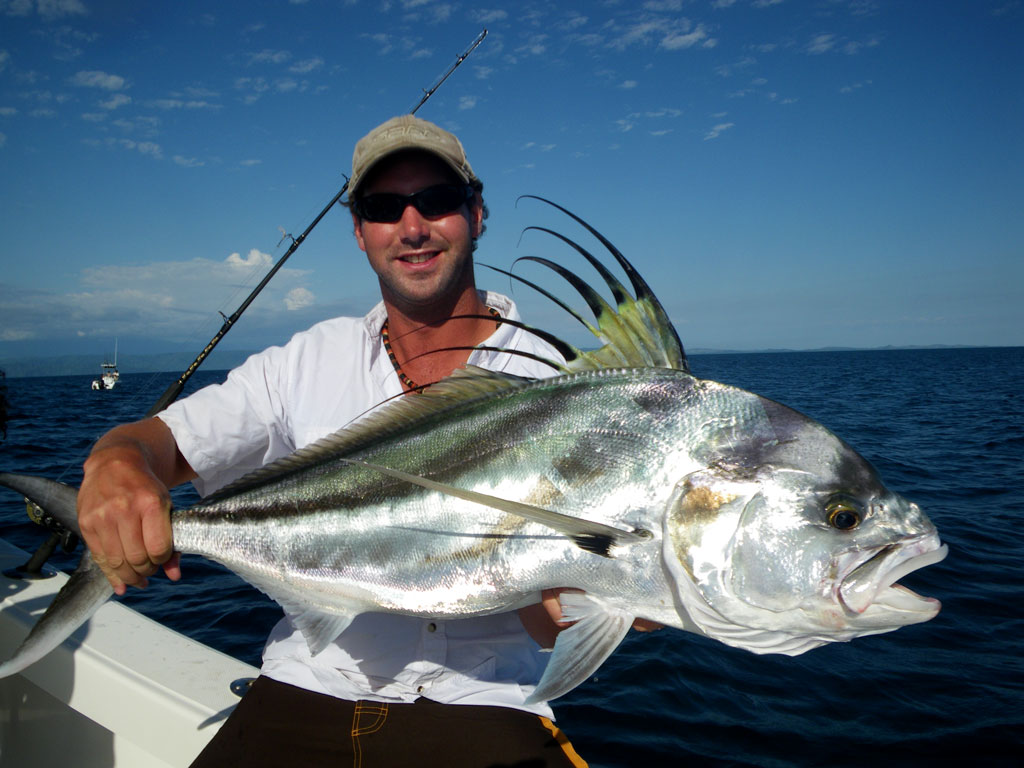 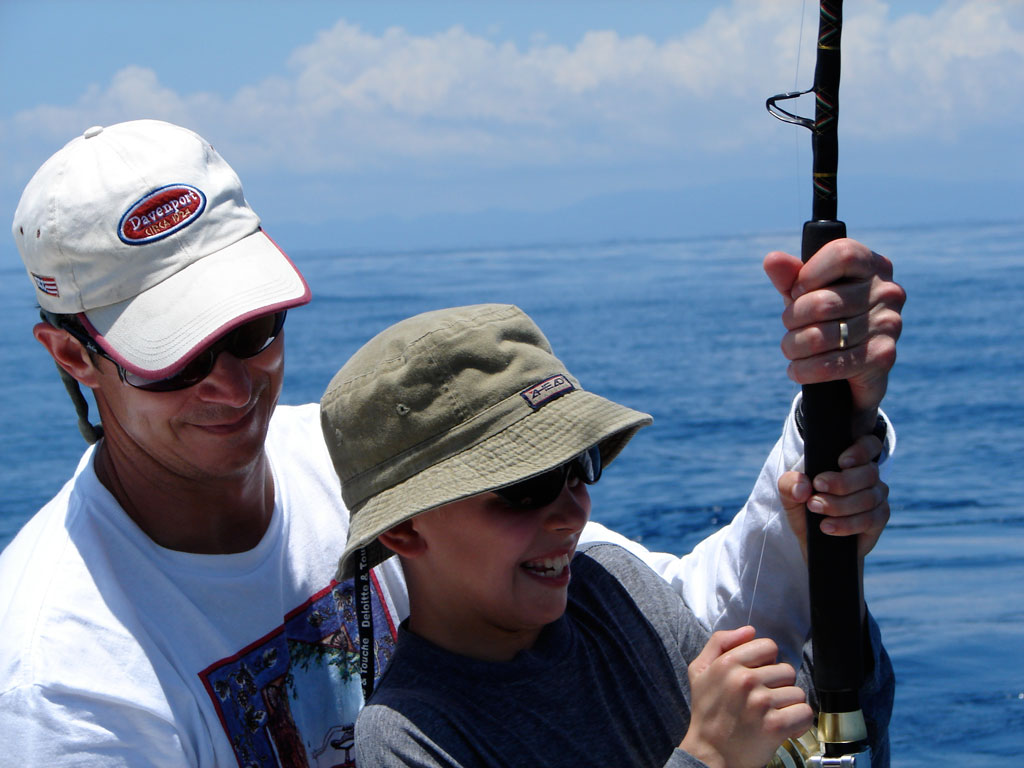 The Gulfo Dulce is one of the deepest gulfs in the world and it is teeming with marine life. From the moment you begin your day on the water you will be surrounded by bait balls (huge schools of threadfin herring), diving pelicans, frigate birds, dolphins and turtles. The abundance of aquatic life doesn’t stop when it comes to the fish.
The Gulf, considered a tropical fjord, is bordered by volcanic coastline, river mouths and mangroves. Inshore fishing takes place in the gulf and coastal waters outside the gulf. Awesome fishing is literally at your front door. Although Roosterfish are the primary target, there are a number of other species to be caught. A variety of snapper, including monster Pacific Dogtooth, Yellow and Colorado, jacks of all kinds, African Pompano, and mackerel to name a few. 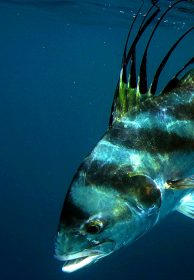 Roosterfish reach weights in excess of 100lbs although the average is 10 to 20lbs. Roosters can be found in 5 feet of water along the shorelines and beaches to 150 foot depths around the deep reefs of the gulf. The most common methods for fishing them is slow trolling live bait (Threadfin Herring, Blue Runners and Goggle Eyes), although they can be caught bottom fishing and casting surface bait as well.  In my years of fishing the gulf I have experimented with different live baits and methods to target large roosters of 40lbs or bigger. These trophy size fish are truly a force to be reckoned with and definitely worth the time put in.
Snapper are one the most sought after fish for table fare here in the gulf. We have a variety of snapper including Yellow, Rose, Mullet, Colorado, Pacific Red, and Pacific Dog Tooth (Cubera). The Cubera, being the largest, reach weights of 80lbs. Snappers are often caught while trolling live bait for roosters or casting surface baits, however if they are the prime target, bottom fishing with live bait is the preferred method. Jigging will also produce fish. A 30lb Cubera with put you and your tackle to the test, with break-offs and being taken into the rocks a common occurrence.

Jacks are one of our most underrated game fish we have. They are quite plentiful in our inshore waters and provide some fast action and excellent fights. You will catch jacks trolling, bottom fishing and casting. Although Jack Crevelle are the most common you will also catch Blue Fin Trevally, Horse Eye and Golden Jacks.
Snook in the gulf are most commonly fished at one of the many river mouths. We have five species of snook with the White Snook and Black Snook being the largest. The world record was caught here and weighed 57lbs 12oz. Although Snook can be caught casting jigs and artificial baits, the most productive method is pitching live bait into the surf and river mouths.

INSHORE SPECIES ARE AVAILABLE YEAR ROUND 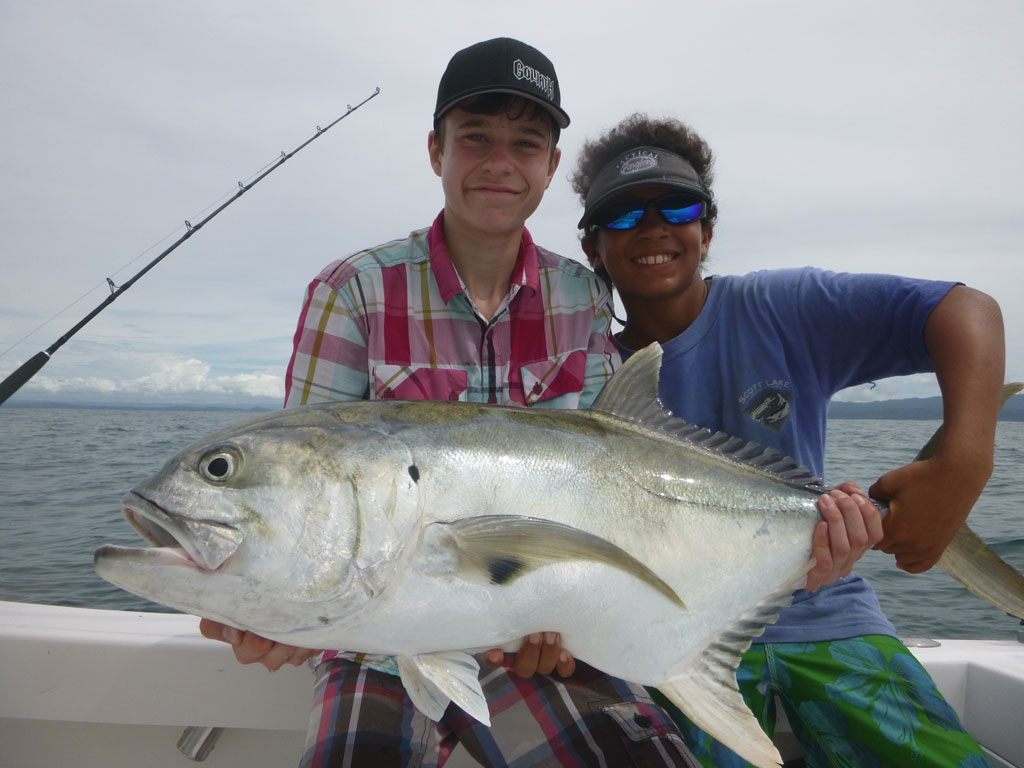 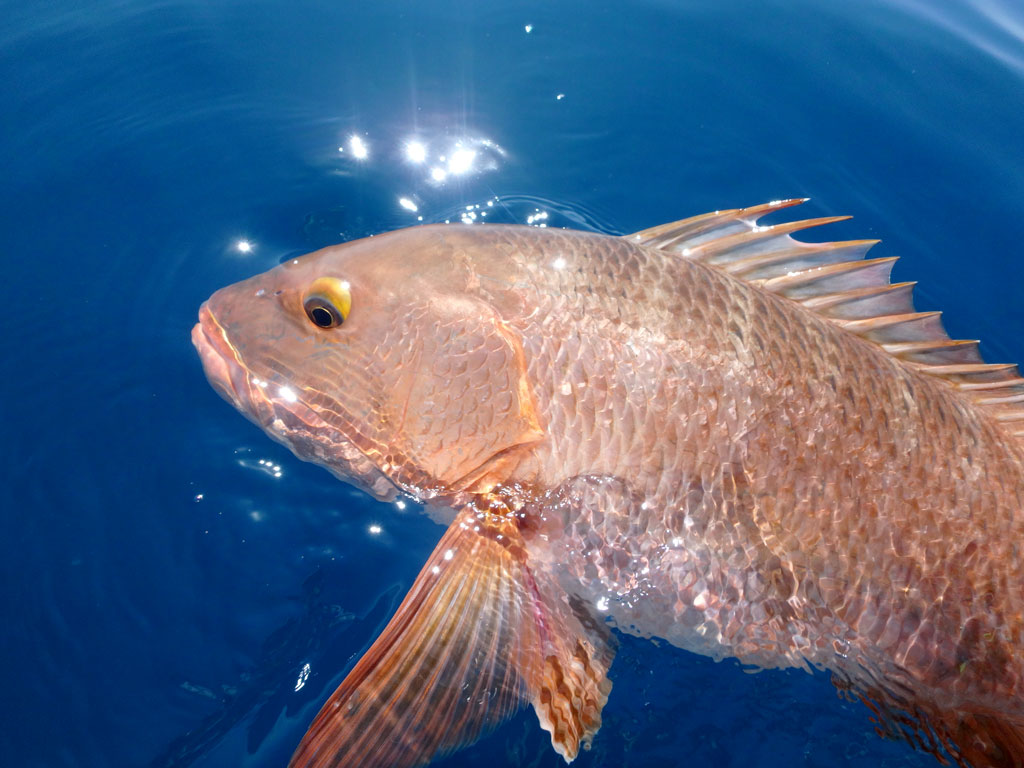 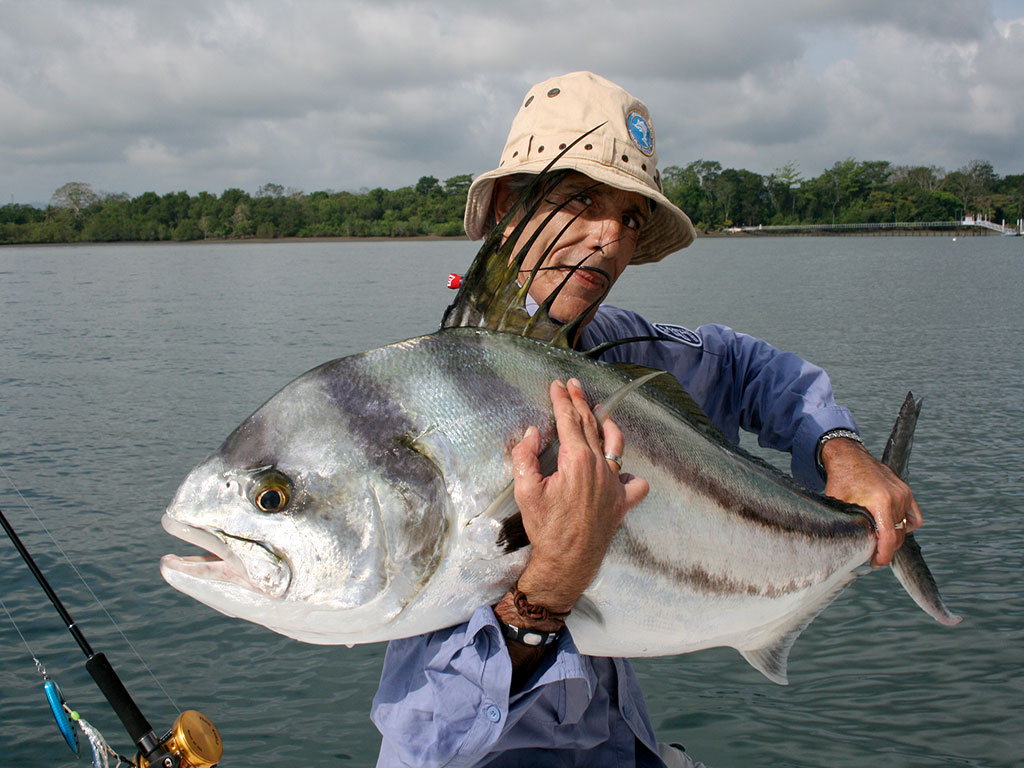 Our offshore fishery begins as close as the mouth of the Gulfo Dulce, where it is not uncommon to catch Dorado, Wahoo and Yellowfin Tuna near Matapalo Rock, the last structure before you head into the offshore waters. I’ve seen Sails and Marlin patrolling these waters too. Depending on where the “blue water” starts, fish can almost always be found within 10 miles of the mouth of the gulf (10 miles from Puerto Jimenez). Sailfish are plentiful, but there is always the chance of an interruption from a Marlin, Tuna, Wahoo or Dorado (mahi-mahi or dolphin fish). These species can also be targeted if you are looking for table fare, but all billfish are released. 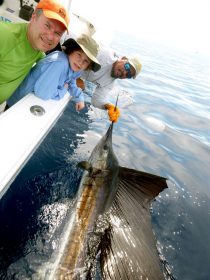 Pacific Sailfish are the most common of our offshore species. The usual method for fishing sailfish is trolling teasers (hookless lures) to “tease” the fish to the surface and pitching bait or casting a fly to the sails once they come up. This is a very exciting and interactive way to hook a 60 to 150lb fish. Once hooked, sails become ballerinas of the sea, with numerous jumps, tail walks and summersaults being typical. The potential for 15 to 20 fish days is not uncommon with 5 to 10 sailfish releases the norm.

Marlin are the largest of the pacific billfish. Blue Marlin are the most plentiful, but Black Marlin are not uncommon, and there are a few Stripes. Marlin will often appear in the spread when teasing up sails, an 80lb rig is always ready to drop back just in case. If Marlin are the target we switch to trolling larger lures and skip baits or slow trolling large live bait like bonito or small yellow fin. 200-300lb Marlin are average but will reach sizes of 800lb or more.

Dorado are very plentiful at times of the year and provide good action and a welcome addition to the dinner table. Dorado will come up in the teaser spread while fishing for sails, but in targeting them we troll rigged ballyhoo and lures. Current and trash lines (floating logs and debris) just outside the gulf are prime locations for Dorado. At times we will even catch Dorado in the gulf while bottom fishing or trolling for Roosters. Dorado are an aggressive sport fish with a lot of power and acrobatics. A floating log can provide some awesome action, with fish taken on poppers and even flies. Our average size fish are 15-30lbs.

Tuna are the muscle of the Pacific. You can expect to be on the stick for hours when that monster Yellow Fin is hooked up. Bonito and Skip Jack are plentiful offshore, although Yellow Fin are the most sought after, both for the dinner table and a little sashimi on board. For Yellow Fin we usually fish in front of the large schools of Spotted, Spinner or White Belly Dolphins offshore. Trolling around them with lures and rigged ballyhoo, or free spooling live bait in front of the schools are the most productive methods. We can also locate them under “working” birds. There is the potential for a tuna of 100-200lbs.

Wahoo are not very common around the gulf, but under the right conditions they are found near the mouth of the Gulf and can be caught in numbers. A great food fish, Wahoo are usually taken trolling lures and rigged ballyhoo. 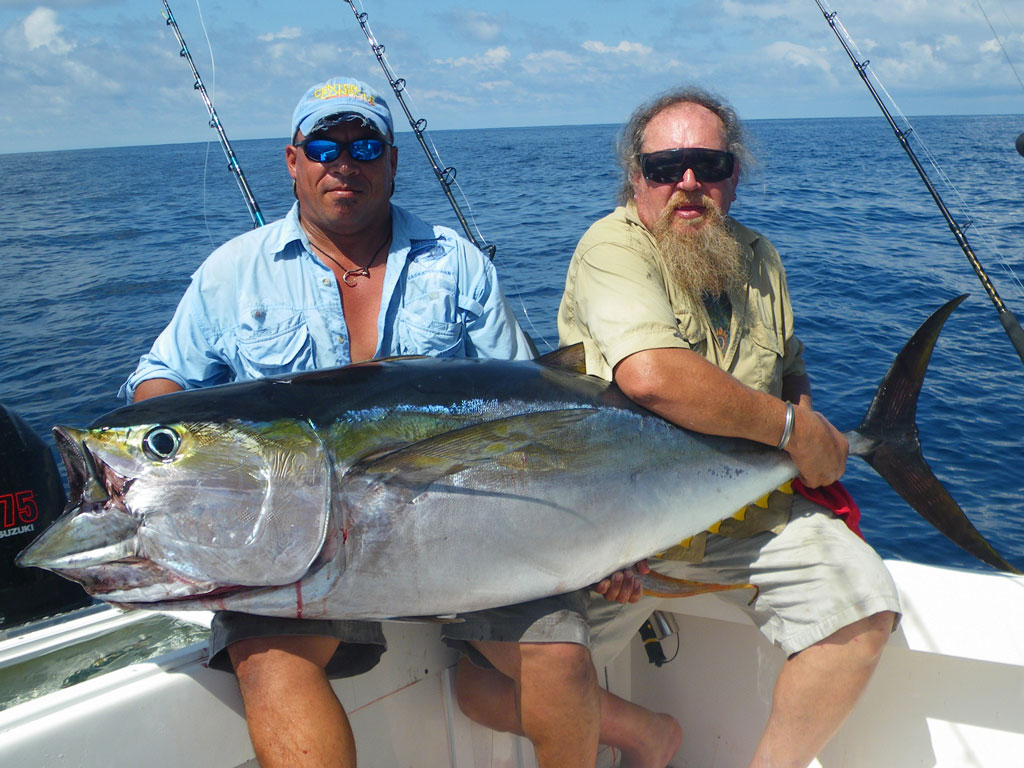 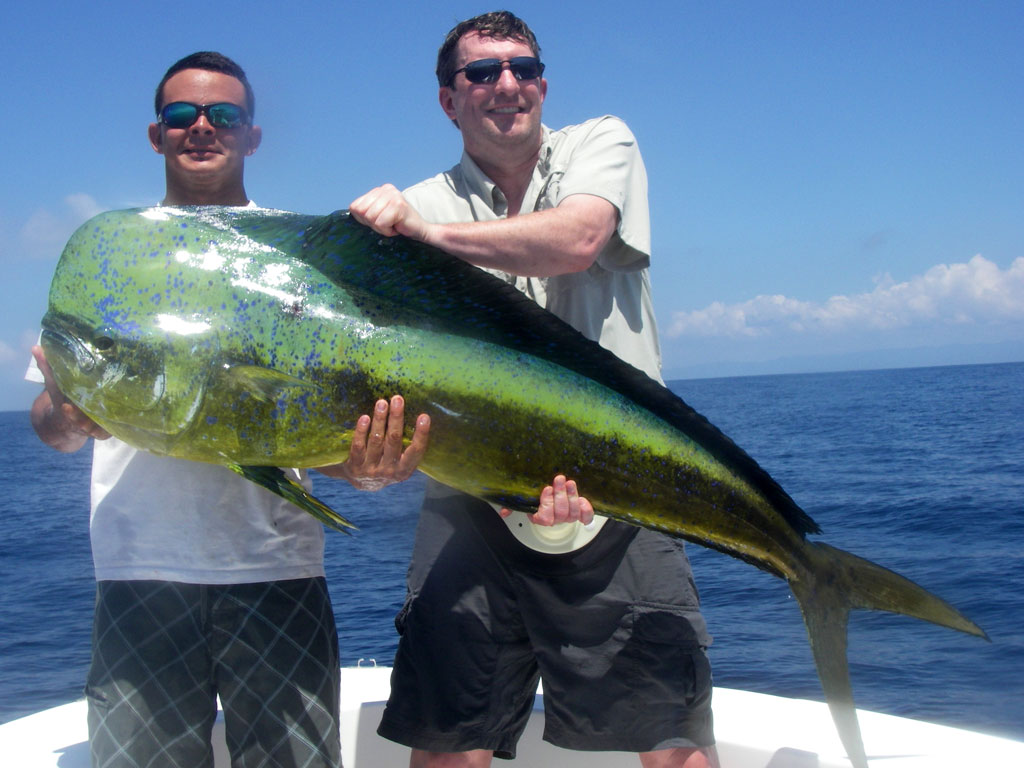 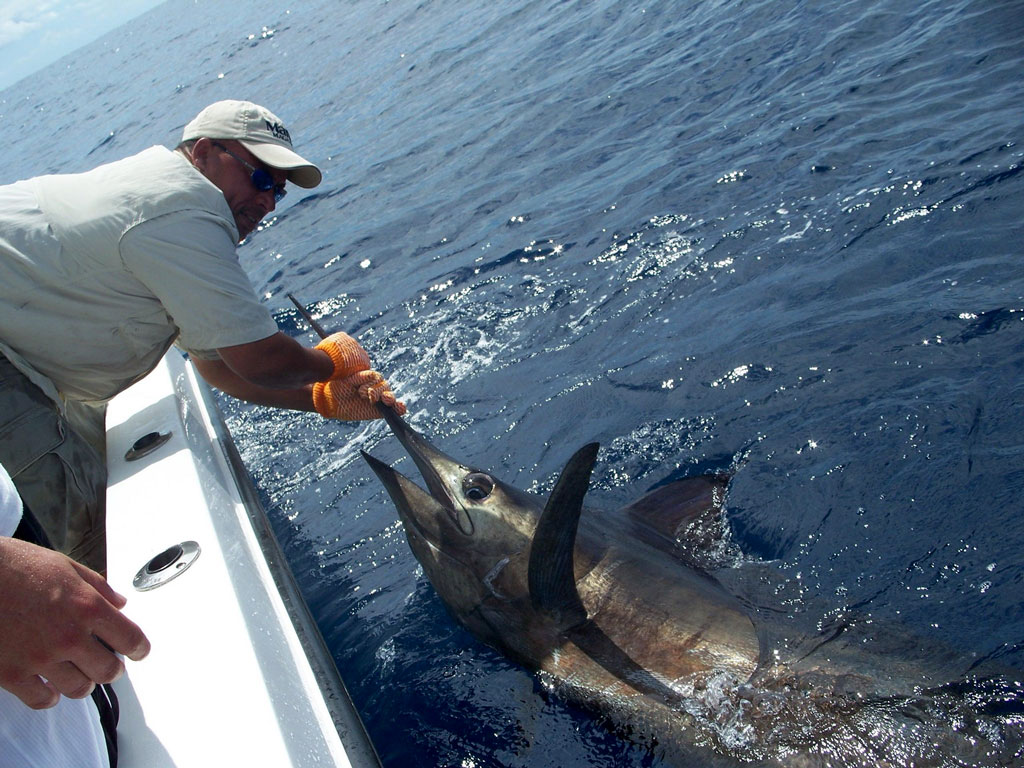 For the Offshore fly fisherman Sailfish are a great target. By teasing fish up, we can bring a fish within 10 feet of the boat, pull the teasers, stop the motors and present you with a 100lb plus fish looking for something to eat. The thrill of casting to such a fish and watching it engulf your fly is never tiring. Sailfish are a prime fly rod target, and a must for the seasoned fly fisherman or novice. Marlin can also be hooked using these methods and casting to feeding Dorado and Tuna is also a possibility.
Inshore, the most productive method is using heavy shooting heads to get flys down upwards of 80'. Doing this you will hook up with Snappers, Jacks, AJs, Tunas and a variety of other fish .Roosterfish can also be taken on the fly, but know that doing this is a real accomplishment. Few people in the world can say they’ve done it. This is usually done with long cast to the surf with floating lines and poppers. 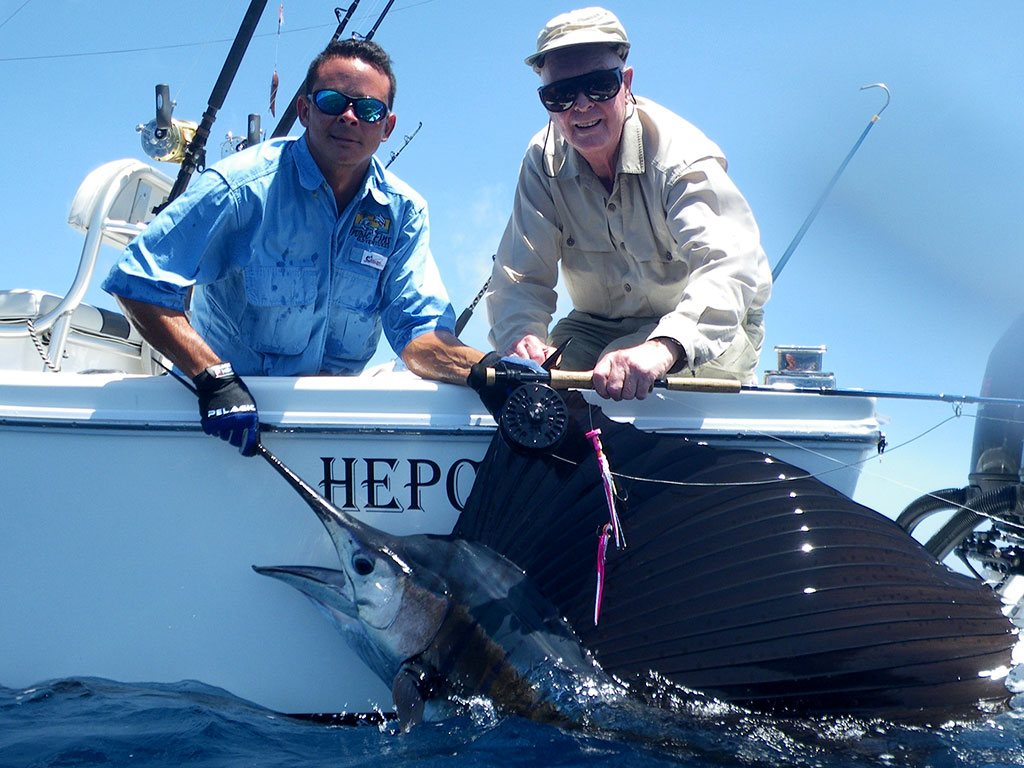 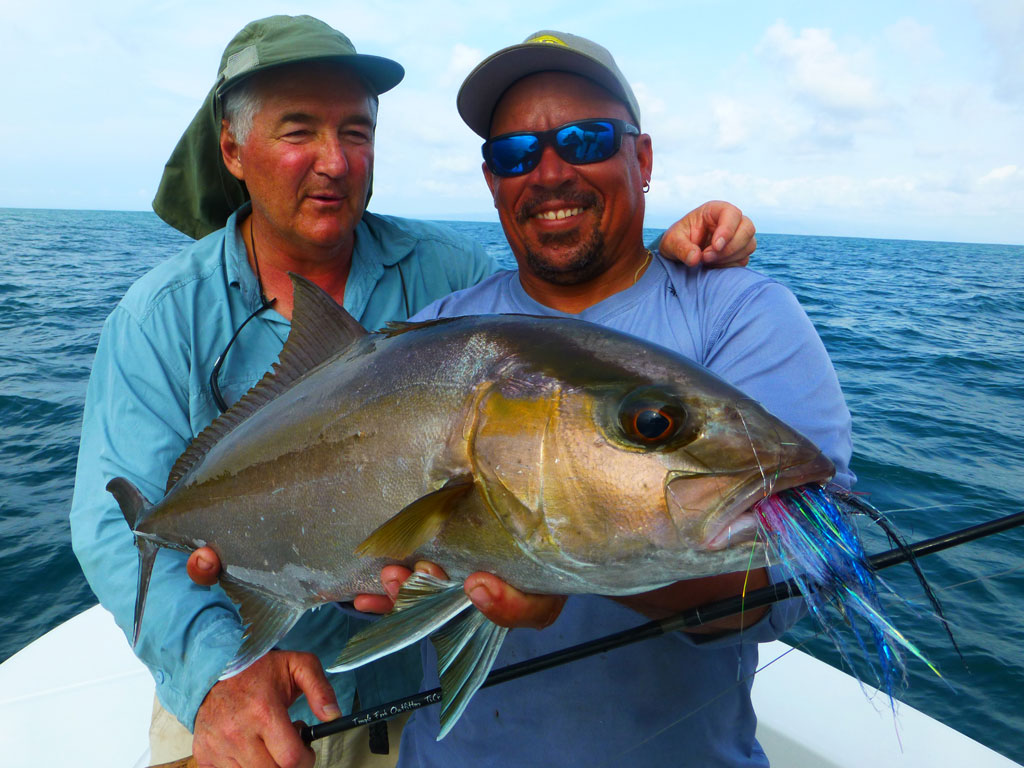 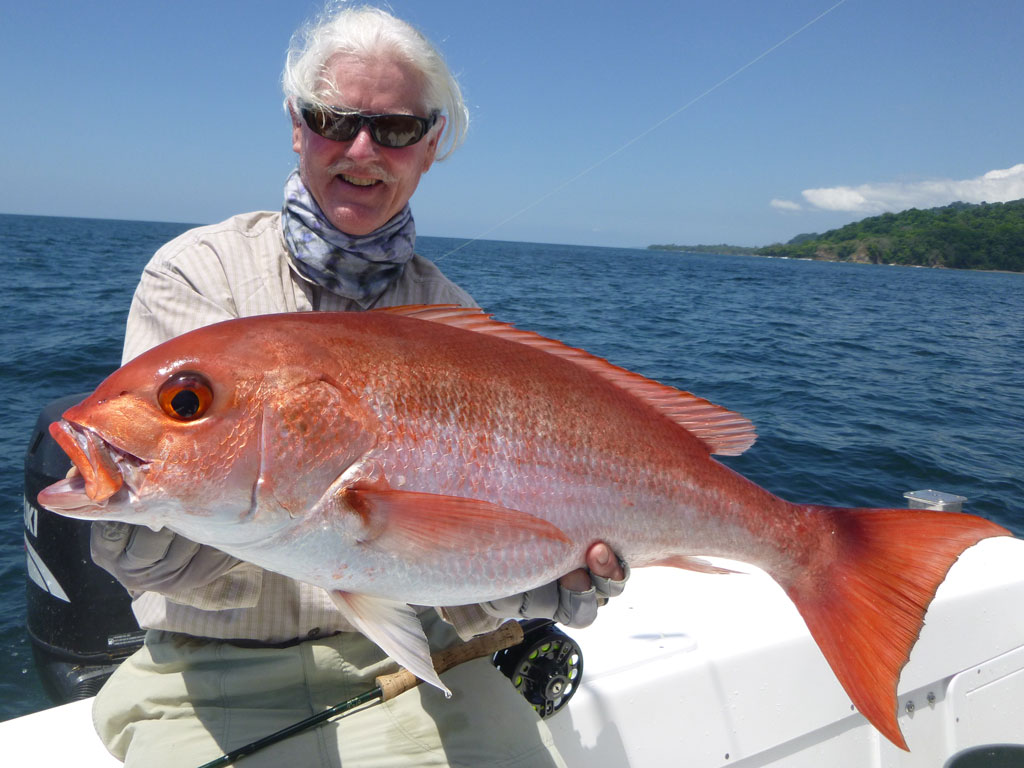 "Hepcat" is our 27' custom build Ocean Runner, and is powered by twin 150 4-stroke outboards. This boat provides a very smooth and dry ride. Fitted with an oversized T-top for ample shade, a head (toilet) inside the console, and lots of dry storage space. It has two large live wells, outriggers, downrigger and tuna tubes. We have installed a top of the line Humminbird sounder/gps, and VHF radio. I had this boat designed with a nice open cockpit with plenty of room for numerous anglers with fish on.

"Reel Hard" is our 21' bay boat. It is powered by a single 150 4-stroke out board. This a great boat for fishing up to four anglers on our inshore waters. It has two live wells and plenty of dry storage areas. We have installed a top of the line Humminbird sounder/gps, and VHF radio. This boat has a large casting platform on the bow and stern, making it ideal for casting and fighting fish.

I pride myself on providing "quality" equipment for my clients to use. I make annual upgrades and always keep up with new products. For rods we use almost exclusively Shimano (Tallus, Trevala, and Teramar), they have provided us with years of reliability and performance. For reels we use Shimano (Tiagras and Tyrnos)for offshore. Inshore 50we use Truth Reels (SGs and LGs), an American made machined aluminium reels that works well for our inshore applications. For Fly fishing we provide Sage fly rods and Scientific Angler fly lines. Vicious provides us with all our braided line, mono line and fluorocarbon leader. Quality hooks from Eagle Claw. For electronics we have both boats outfitted with Humminbird sounder/GPS combos. Down riggers from Cannon. Gaffs, nets, and clothing from Aftco. Myself and my crew wear the best polarized you can buy from, 580 lenses from Costa Del Mar.